The Legacy of the Sarasota Colony 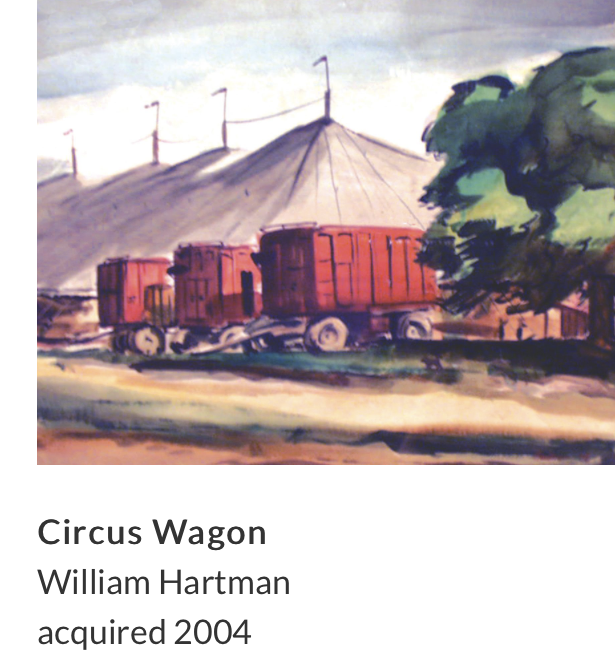 They liked nothing better than painting and sculpting. But artists also enjoyed having fun at costume balls and gallery openings during the golden age of the Sarasota Colony in the years following World War II.

William (Bill) Hartman, owner of William Hartman Gallery on Palm Avenue should know. His father, represented in Arts Advocates' collection with the painting "Circus Wagon, "was one of the leaders of the movement.

"What ignited the art scene was the GI Bill," said Bill. This government program offered to return veterans tuition and living stipends for college or vocational programs. Airbases throughout the state trained thousands of pilots. Many came to love the area and decided to stay and study at more than a dozen art schools that opened to meet the growing need.

The core Sarasota Colony consisted of about 60 to 70 artists who were full-time residents, according to Bill. Many of these artists also had their own schools or taught at the Ringling School of Art, including Syd Solomon and Wilfrid Berg. Another was Hilton Leech who owned the Hilton Leech House and Amagansett Art School on Hillview Street that is listed in the U.S. National Register of Historic Places.

Seasonal visitors and retirees from the north provided additional students for the art schools. Sarasota, with all its charm, provided the subject matter. The Ringling Circus, headquartered in Sarasota, figured in many paintings

"My father attended the Ringling School of Art on the GI Bill where he met my mother," said Bill. He opened the Hartman Gallery in the building that now houses the Sage Restaurant. Next door was the Syd Solomon Sarasota School of Art.

In the 1950s downtown Sarasota was the heart of the arts community. Businesses would pick an artist to showcase with an exhibit of their artworks. They would take out ads and host opening day parties that were well attended. Dozens of artists exhibited their paintings at the Sarasota Art Association.

"At that time, Sarasota was best known for the visual arts," said Bill (pictured below with a painting by his father.) The formation and growth of performing arts organizations came years later.

In 1956, Ben Stahl, a staple of the colony, was commissioned by the Catholic Press of Chicago to create 14 paintings of the Stations of the Cross for a new Bible.

"These paintings were fairly sizable and he wanted to show them locally. There was only one gallery big enough and it was owned by parents. My dad made all the frames for the paintings. Over the next two weeks, there were lines out the door and 5,000 people came to see the show. That's how important the visual arts were," said Bill.

Women artists were an important part of the Sarasota Colony. In 1953, The Petticoat Painters was founded by Martha Hartman to showcase the talents of female artists. Helen Protas, an early abstract artist, was a founding member. The by-invitation-only group still exists.

But it wasn't all work and no play. Besides gallery parties, "There were dances at the Lido Casino and the Beaux Arts Ball," said Bill. Colony artists showed another side of their artistry at this annual party where prizes were awarded for the wildest and most original costumes.

By the 1970s the members of the colony began to pass away, their artwork a lasting legacy of a movement that has only become stronger as Sarasota grew to become a destination for visitors and residents who have flocked here because of our flourishing arts and cultural community. 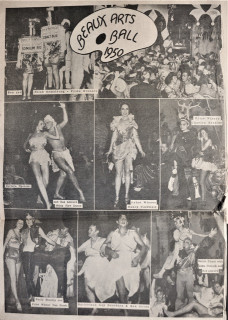 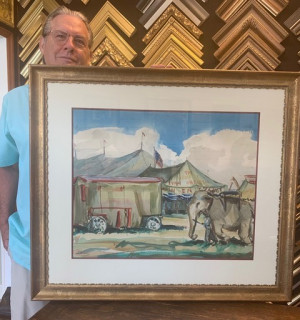 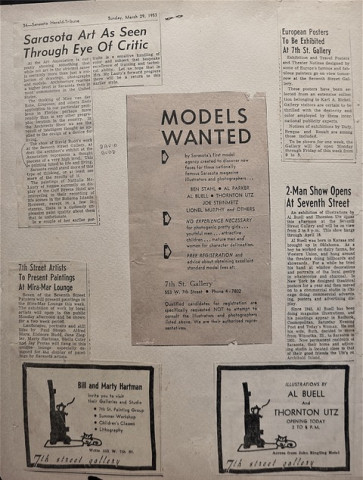 Together Again in Person!
Public Art in Sarasota