Backstage at the Asolo 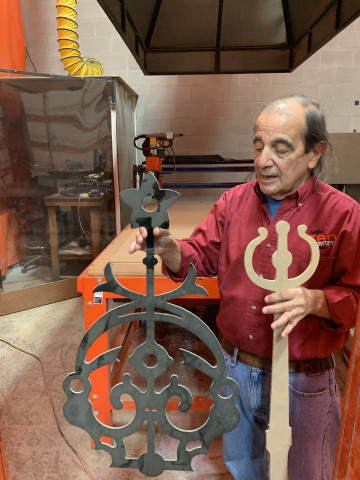 Vic Meyrich, Production and Operations Director, Koski Center, with a prop produced for the Sarasota Ballet.

The smell of the grease paint – the roar of the crowd. How our heart races in anticipation of a theater performance as the lights dim and the curtain rises.

That's been my experience over the years of attending live performances. Actors bring the show to life but there many more people behind the scenes who help make it happen.

That's why I was so pleased to be invited to a recent tour of the Asolo Rep Robert and Beverly Koski Production Center on Tallevast Road in Bradenton. It is a huge beehive of activity where carpenters, painters and other artisans make sets for plays, props, wigs and costumes in preparation for productions at the Asolo Repertory Theater and other companies including the Sarasota Opera and Sarasota Ballet.

The Koski Center also constructs sets and props for cruise lines and other performing arts organizations around the country. For example, it is currently building oversized wooden replicas of books for a cruise line show.

Led by Vic Meyrich, Production and operations director, who has been with the Asolo for more than 50 years, visitors saw dozens of chairs, desks, lamps and other props that that are used in productions. If one doesn't already exist, then the exact prop needed is built from scratch. Huge wooden panels dot the floors ready to be painted and turned into sets for future shows.

The Koski Center built the moving ladder (photo) for the production of "Evita" and the moving staircase for "Hair" (photo).

Preparing for the Future

The Asolo is in the middle of a fundraising campaign to expand its Koski Center and community outreach initiatives. A new building will house the Ted Weiller Rehearsal Hall and additional space for the costume shop. Upgrades in technology will provide state-of-the-art facilities to attract world-class artists and spawn productions that could transfer directly to Broadway.

While all this is happening, though, the Asolo is in the middle of high season with performances of three shows on sets that the Koski Center built. These have to be assembled, broken down, and re-assembled as the shows rotate performances over the next several weeks.

How fortunate we are to have this world-class theater and production center right here in Sarasota/Bradenton. For ticket information visit Asolo Rep. 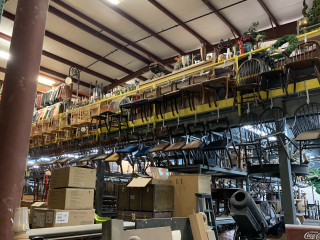 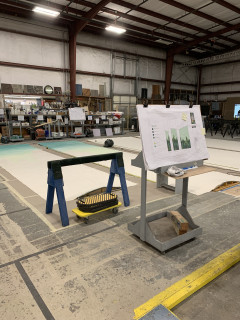 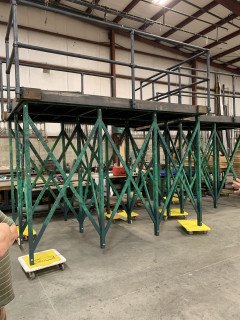 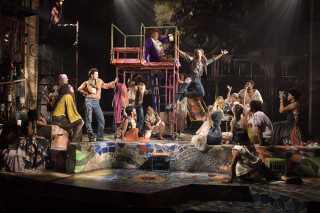 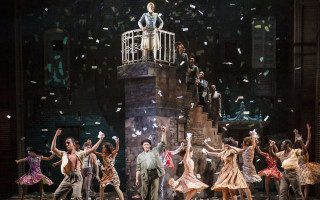 Cast of Asolo Rep's production of EVITA. Photo by Paul Miller.
Facebook Twitter LinkedIn
How I Learned to Write a Play
So, You Want to Play the Piano