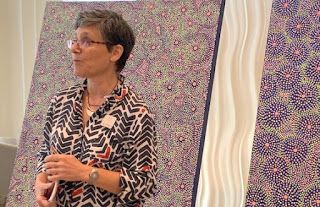 I'm going to go out on a limb and say it's the rare hotel that has its own cultural curator. I'm not talking a concierge who can secure tickets for a show or suggest a local restaurant. The job of a cultural curator is to ensure cultural experiences within the hotel for its guests and the public. Enter Lisa DiFranzo and Art Ovation Hotel.

On my inaugural outing with the Fine Arts Society of Sarasota (FASS), we met DiFranzo for a tour of the Robert Doyon: Walkabout exhibit. First, however, she gave us some background on Art Ovation. 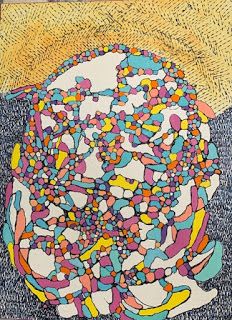 The goal of the Marriott "Autograph Collection" hotels is to provide guests with opportunities to engage in activities reflective of the local community. In Sarasota, that means the arts.

At any given time, Art Ovation has multiple art exhibits on display. Guided tours are offered weekly for a small fee (with glass of wine in hand if you choose). There's a studio in the lobby with an artist at her easel--or the equivalent--during the cocktail hour. Each room is stocked with a sketch book and colored pencils for guests inspired to create their own art. The first page of every book contains a drawing by a student at Ringling College of Art & Design.

Musical entertainment can also frequently be enjoyed in the lobby. And if you want to make your own music, every room has its own ukulele, with free lessons given on Friday afternoons. Other instruments from the cello to drums will be delivered upon request. (Headsets are provided so as not to disturb other guests.) 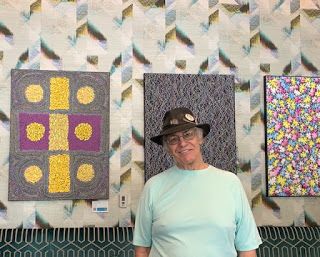 Doyon with his work -- Don't miss the continuation of the exhibit in the restaurant!

This is a long-winded intro to the work of Robert Doyon, which is now on display at Art Ovation. Doyon was on hand to share his work with our group. While I'm sure DiFranzo would have done a terrific job, it was great to hear from the artist firsthand.

Doyon refers to himself as a "Swiss artist's knife" due to the variety of his artistic endeavors. In his earlier life, he worked in design and fabrication at Disneyworld and other Orlando area theme parks. But the time came when he wanted to focus on his own work. He went back to school at Ringling and graduated at the age of 48. For the past 25 years, he's been creating his own style of abstract and conceptual work.

When discussing his work, Doyon repeatedly returned to the idea of balance. It's a concept particularly important to him because he suffers from PTSD from his time in Viet Nam. And while the works do have specific meanings to him, he referred to them as "colorful Rorschach tests" that will evoke different moods and interpretations in each person. (For me, his "Connecting My Dots" called to mind an Easter egg. In my defense, lunchtime was approaching.) 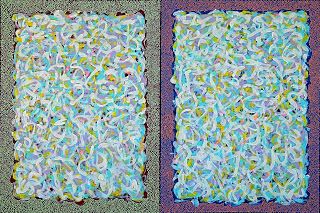 I particularly enjoyed hearing about his inspiration for "Mirror Twins." Doyon's father and uncle were what he referred to as "opposite twins." When the brothers faced one another, they appeared to be mirror images. Their personalities were equally opposite, with his left-brained father working as an engineer and his right-brained uncle as an art professor.

Doyon also shared the backstory to how he came to call this exhibit "Walkabout." The term refers to the Australian aboriginal practice of sending young men out into the wilderness where they live on their own for several months. The 1971 movie of the same name captured Doyon's imagination. In it, two citified kids find themselves lost in the Australian outback and are befriended by an aboriginal boy off on his walkabout. The concept of the trio figuring out how to make their way together spoke to him.

Thanks to FASS for organizing this interesting tour. Robert Doyon's "Walkabout" will be on display at Art Ovation through October 2. To check out the hotel's schedule of events, click here. It's a great addition to our cultural community.