Art at the Van Wezel 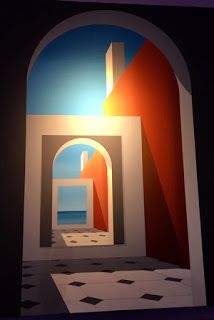 The World Within by Humberto Calzada

I suspect I'm not the only person guilty of rushing into a theater without taking the time to enjoy my surroundings. Sure, I'll notice the architectural elements of the performance space, but it's unlikely I'll walk the building to check out the art. And when it comes to the Van Wezel, there's definitely some art worth enjoying. Happily, the Fine Arts Society of Sarasota conducts free monthly tours during the season. It was an hour well-spent.

The Van Wezel was built in 1969, the same year the Fine Arts Society was founded. From the beginning, the Society has used the Van Wezel as gallery space to showcase its Florida-inspired art collection. Our tour guide was quick to note that despite the Florida theme, the artwork is not created by "sell your art on the beach" artists. Instead, the collection includes paintings--and a few sculptures-- by accomplished artists who either have a strong Florida connection or whose work features water.

Humberto Calzada is known for his paintings inspired by the architecture of his hometown of Havana. It's hard to turn down the invitation to enter Calzada's The World Within. The light is handled so beautifully, and the Caribbean awaits you. Calzada signed each portal into his dream-like world, a detail our guide helpfully noted. 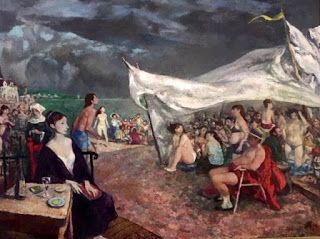 I would put money on the fact that most Van Wezel patrons haven't noticed Ben Stahl's Thunder on the Beach. Although it's located only two paintings down from The World Within, the lighting is so poor that our docent had to use a flashlight to illuminate it for our group. And that's a shame, because it's an interesting painting depicting America's sudden foreboding about the coming of WWII. "Wait," you can almost hear people say. "Is that a storm on the horizon?" Stahl's portrayal of the beachgoers in various states of undress represents the country's lack of preparedness for the war. And then there's the one fat cat sitting happily on the beach smoking a cigar. Is he a profiteer? 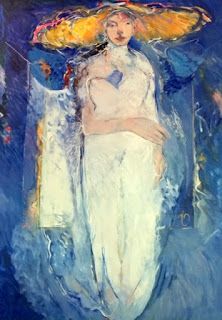 Our Angel by Craig Rubadoux

Stahl himself was quite an interesting character. He won a scholarship to the Art Institute of Chicago at age 12. In addition to being a painter, Stahl was an illustrator whose work graced the pages of The Saturday Evening Post. He created the poster for Ben-Hur and the illustrations for the 25th anniversary edition of Gone with the Wind. He had his own TV series entitled Journey into Art with Ben Stahl. And he was an artist in the Air Force, which brings us full circle to Thunder on the Beach.

From across the room, Craig Rubadoux' Our Angel has the look of an Art Nouveau painting. But as you approach, you realize the work is much more free flowing. The angel seems to float in a sea of color. How else could her golden hair mimic the shape her budding wings will eventually take? "Exuberant" is the adjective most typically used to describe Rubadoux' work.

Rubadoux is Sarasota born and bred and now works from his home on Englewood beach. His artwork can frequently be seen at Allyn Gallup Contemporary Art Gallery. Click here to read an article from The Observer about this charming artist. 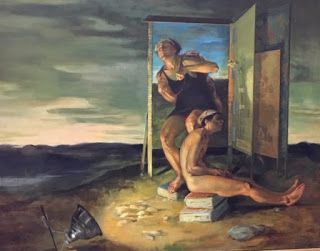 Lynn Davison is another Florida-based artist whose work can be found at Allyn Gallup. Davison also shares her alma mater of Ringling College of Art + Design with many artists whose work is in the collection.

Davison's interest lies in the human figure. Davison's depiction of her subject's bodies is impressively realistic, from the tension in the woman's knee and calf to the toes of her companion's feet. She said in an interview in Gulfshore Life, "I want my figures to provoke introspection. While they're essentially revelations of self, I hope they also portray universal truths about what it means to be exposed, disconnected, vulnerable and human."

Pressing Leaves was painted at a time when Davison took a somewhat surrealistic approach to her work. The figures and setting are classical, but what are this doorframe, Japanese style screens and spotlight doing out in the middle of nowhere? Not to mention the obvious question -- why is this naked guy sitting on these books? Today her work is more personal. To read the Gulfshore Life article and see more of Davison's work, click here. 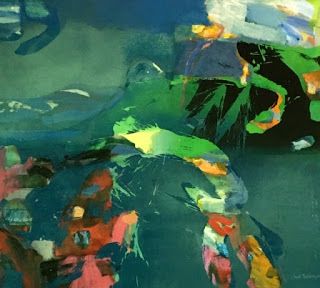 And what would a collection of work featuring Florida artists be without a painting by Syd Solomon? Solomon is probably the most acclaimed artist to have come out of Southwest Florida. He and his wife moved to Sarasota when he was still a budding artist in his late 20s. He had found his home. The Ringling Museum was the first of many museums to display Solomon's work. Solomon was a first for Ringling as well, as he was the first contemporary artist to have a painting displayed there.

Stravinsky is the perfect choice of Solomon's artwork to be on display at the Van Wezel. It is, after all, the home of the Sarasota Orchestra. Solomon began this painting while listening to one of the composer's works on the day of his death. The loss was more than that of a fellow creative soul. He was friends with Stravinsky's son Soulima, who also lived in Sarasota.

I learned from our docent that Solomon served during WWI in the First Camouflage Battalion, where he worked to conceal potential enemy targets located on the California coast and London. (To see pictures of the camouflage of California, click here.) But Solomon's primary job during the war was conducting aerial reconnaissance, a job that inspired his abstract art. Knowing this background does put a new spin on his work.

If you want to see more of Solomon's painting, the timing couldn't be better. Allyn Gallup has an exhibit on now through January 28. To read more about Solomon and the exhibit, click here and here.

The next time you're in the Van Wezel, take a few extra minutes to enjoy the art. There will no doubt be works that leave you cold. Art is personal after all. But there will likely be a few that draw you in. Thanks to the Fine Arts Society for sharing its collection with the public. For information on upcoming tours, click here.